Arrive at Suez about 500 troops, officers and nurses disembark for Cairo, which is about 6 hours train ride through the desert.  We arrive at 6.30 am and leave again at 12 noon and enter the Suez Canal and see all the British and Indian troops on the banks both sides of us.  See their trenches and wire entanglements which run down to the water's edge.  We shouted to the troops and they to us telling us the different regiments to which they belong and they enquired the name of our ship and we cheered and cheered again as we passed our gallant troops.  We saw the spot where the Turks and Germans tried to cross the Suez and were so utterly defeated.

The heat is most terrible, much worse than the Red Sea.  We felt as though we were being baked or roasted alive.  The heat from the sandy desert and the glaring white sand, how sorry we felt for our troops who had to endure this terrible heat for an indefinite period.  They shouted to us that they had no money and no fags, but money is of no use in a desert and so we left them with only our sympathy.
Posted by M J Fouracre (nee Day) at 13:01 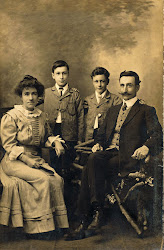